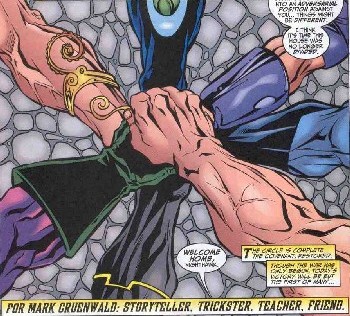 The big seven are together again. There is a dictatorship. They will decide together what to do. The end.
Squadron Supreme: New World Order was a 1998 story of the Squadron Supreme, a group of Captain Ersatzes of the Justice League of America published by Marvel Comics.
Advertisement:

At the end of the famous 12-issues limited series, the Squadron Supreme gave up their world domination plot, and ended using their "Utopia" machines that Nighthawk warned may be used to establish a dictatorship. However, they could not destroy them: in Death of a Universe they had to go to space and fight against a cosmic entity, and ended lost in the proper Marvel Universe. But now, finally, they have returned to their own reality.

But things did not go well: their ship crashed when landing. Doctor Spectrum took Shape and Lady Lark to an hospital, Whizzer and Arcana to see their families, and Hyperion and Power Princess to the Squadron headquarters. Shape and Lark were detained as unregistered super-humans by the Blue-Eagles (stormtroopers modeled after the late Blue Eagle), Spectrum escaped. Whizzer was attacked as well, but his family (not him) was rescued by the Nighthawks (resistance soldiers, modeled after the late Nighthawk). Arcana was told by the new Sorcerer Supreme that magic was changed during the Squadron's absence, and that she must study it all back from the beginning before rejoining the group. Hyperion and Power Princess, soon reunited with Spectrum and Whizzer, realized that the U.S. was now a totalitarian state, using their old Utopia machines.

They left for Power Princess' island, and the Sorcerer Supreme gave them advice: to know what to do, they must find "The Watcher, the In-Betweener and the Dark Phoenix". No, not the ones you thought. Doctor Spectrum located The Skrull, the alien who first gave him the prism. The Skrull had not leave the planet as he had told, he does not have the means for that, and stayed instead watching for all the UFO sights to see if any of them was a remain of the old Skrull empire. He is the "watcher". Power Princess visited the bottom of the ocean to recruit the help of Amphibian, who was against the Utopia project since the beginning, and who lives between worlds, not fully human, and not fully fish... the "In-Betweener". And Hyperion recruited the help of Nighthawk, the leader of the Nighthawks. Nighthawk died to stop the Squadron, and now he's back (sort of), so he's the "Dark Phoenix".

With the original Squadron reunited, they are ready to fight against the dictatorship, And the Adventure Continues...