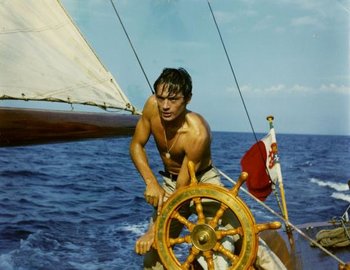 Yo-ho-ho, it's a pirate's life for me
Advertisement:

It is the first adaptation of Patricia Highsmith's novel The Talented Mr. Ripley. Tom Ripley (Alain Delon in his Star-Making Role) is sent from America to France in order to get his friend, callow rich boy Philippe Greenleaf to stop gallivanting around Europe and come home to work in the family business. Philippe isn't particularly interested in coming back home and going to work, and Tom, who comes from a poor background, finds out he rather likes Philippe's luxurious lifestyle. Soon the both of them are gallivanting around, often in the company of Philippe's attractive girlfriend Marge.

Eventually Philippe grows weary of Tom, his fawning, lower-class companion, and starts to treat him badly. Tom is stung by betrayal from a friend he worships (and may be attracted to). Suddenly the tension erupts in violence.

Compare The Talented Mr. Ripley, a 1999 English-language adaptation of the same book that starred Matt Damon as Tom, Jude Law as Dickie, and Gwyneth Paltrow as Marge.