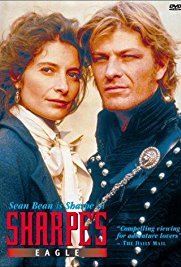 Spain 1809
Napolean Bonaparte is master of Europe.
His brother Joseph sits on the throne of Spain.
Sir Arthur Wellesley, soon to be Lord Wellington, the new British Commander, has crossed into Spain.
Now, together with his Spanish allies, he will do battle with the French at Talavera.
Sharpe and his Chosen Men accompany Major Hogan and the South Essex Regiment to destroy a vital bridge. When the incompetence of the South Essex's commander, Colonel Sir Henry Simmerson, results of the loss of the Regimental colours, Sharpe resolves to take an Imperial Eagle at the Battle of Talavera.