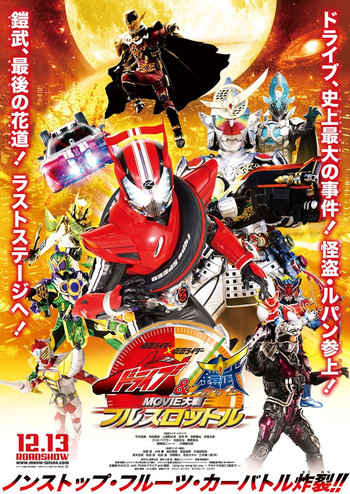 Gaim's section, titled "Charge into the Last Stage!", set after the end of his series, involves a new, unknown metallic life form known as Megahex. It crashed on Kouta & Mai's peaceful planet with the aim of destroying both it and Gaim. Kouta fought it at his strongest... but was still defeated?! Meanwhile in the now peaceful Zawame City, the remaining Kamen Riders, with restored powers, must take on a seemingly revived Ryoma Sengoku.

In Drive's section, titled "The Challenge from Lupin", the Special Division must track down Zoruko Tojo, aka the Ultimate Thief Lupin. It won't be so easy, as not only he somehow possesses the power to cause Slowdowns, he is also able to transform like Shinnosuke can, turning into the villainous Kamen Rider Lupin!. His goal - to steal the title of Kamen Rider itself. The mysteries pile up - Why does Tojo desire the title? What is CyberRoid ZZZ? And how does Mr. Belt fit into all this?