Film / Kamen Rider Build Be The One 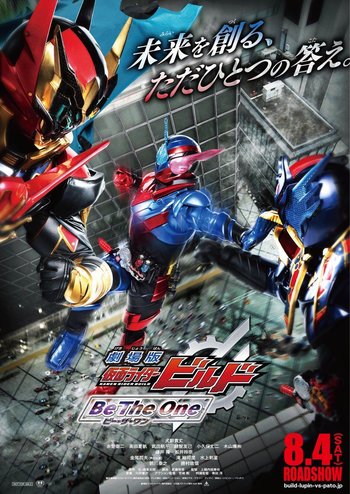 "Now, shall we begin the final experiment?"note From right to left: Kamen Rider Great Cross-Z/Ryuga Banjou, Kamen Rider Build/Sento Kiryu and Kamen Rider Blood/Kengo Ino
"The one and only answer to create the future."
— Tagline
Advertisement:

Following the Japanese Civil War in Build’s timeline, Seito, Hokuto and Touto are now all led by governors instead of prime ministers and actively working to reunify Japan. However, the governors are secretly part of an evil alien race called the Blood Tribe who seek to destroy Earth and consume it. Deeming Sento Kiryu/Kamen Rider Build a threat to their goals, the three initiate their “Build Destruction Plan”, brainwashing the population of Japan and Sento’s friends against him.

Kamen Rider Build: Be The One features examples of: