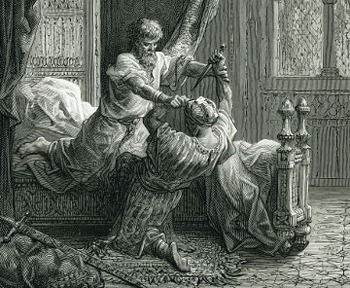 "When the Christian crusaders in the Orient came across that unconquered Order of Assassins, that free-spirited order par excellence, whose lowest ranks lived a life of obedience of the sort no order of monks attained, then they received by some means or other a hint about that symbol and motto, which only the highest ranks kept as their secret, "Nothing is true. Everything is permitted." . . . Well now, that was spiritual freedom. With that the very belief in truth was cancelled. . . Has a European, a Christian free spirit ever wandered by mistake into this proposition and its labyrinthine consequences?"
— Friedrich Nietzsche, On the Genealogy of Morals.
Advertisement:

Historically, the Assassins were the protectors of the Nizari Isma`ili Shia Muslimsnote The Nizaris are still around today; they're mostly concentrated in Pakistan and India and recognize the Aga Khan as the current Imam. and their communities, and were friends to the common folk under the rule of their enemies. The Assassins were renowned for their libraries, which scholars and priests would travel from miles around to make use of, and their observatories, which took advantage of the mountains where they were built. The Nizari themselves also had incredible artisans and were masters of hydrological engineering, which they had use to irrigate and farm the valleys around the Assassin strongholds, giving them and the Assassins an abundance of foodstuff for their own purposes and for trading.

It is said that when Hassan ibn Sabbah and his followers first came to the valleys around Alamut and her sister citadels and fortresses, the townsfolk were starving and living in squalor. They didn't have the means to properly irrigate and farm. When Hassan and his followers managed to irrigate and create farmland and accessible water sources, the townsfolk repaid Hassan in kindness, by converting to Nizariyya, and by allowing for their sons to be chosen and trained to be Assassins.

When the Templars and Hospitallers were neighbors with the Assassins during the Crusades, it was said that the Assassins paid both Knight orders a handsome sum of 2,000 bezants a year, for access to the many resources said Knight orders had in their possession, including port access and trade routes.

Aside from Alamut (Eagle's Nest), there were 23 additional fortresses that the Assassins were in command of, stretching from the Alborz Mountains, where Alamut is located to the Orontes Mountains and Valley, where Masyaf (Summer Palace), the Headquarters of the Syrian Branch of the Assassins is. During the time of Hassan-i-Sabah, Maysaf was under the command of Rashid ad-Din Sinan, who was a very prominent student of Hassan. During his time as Shaykh (Prince/Elder) of Masyaf, Rashid had earned a reputation for developing strange, mystical powers, which made him even more threatening to the likes of Salah-ad-din, and various other warlords of the area. Whenever they spoke of Shakyh-al-Jubal or Elder of the Mountain, or Prince of the Mountain, they were usually speaking of Rashid.

Unlike Hassan who lived on the premises of Alamut well unto his death, Rashid maintained residence nearby at al-Khaf (the Castle of the Rock), and left Masyaf under the command of the da'iyyin, who were Rashid's most trusted associates. When Rashid passed away, the da'i took over and abandoned al-Khaf. Before Rashid's death, the command of the Assassins had transferred over to Masyaf, after Alamut was razed by the Mongols.

When Masyaf surrendered to the Mongols, the Assassins continued their services to whoever would have them, well until the 15th century, when they supposedly faded into the mists of history. According to the historian Yaqut al-Hamawi, the Böszörmény (Izmaleita or Ismaili/Nizari) denomination of the Muslims who lived in the Kingdom of Hungary in the 10–13th centuries were employed as mercenaries by the kings of Hungary. However following the establishment of the Christian Kingdom of Hungary, their community was vanquished by the end of the 13th century due to the Inquisitions ordered by the Catholic Church during the reign of Coloman, King of Hungary. However, despite their community being vanquished from Hungary, there is a college town that bears their name.

Furthermore, it is important to note that the Assassins (Asasiyun) are the ancestors of those given the surname Hajaly. Hajaly is derived from the word Hajal which makes reference to a rare species of bird found in the mountains of Syria near Masyaf. The Hajal (bird) was often a symbol in the Assassin's order. The Hajal is a cousin of the eagle and the falcon.

The Assassins were generally young in age giving them the physical strength and stamina which would be required to carry out these murders. However, physical prowess was not the only trait that was required to be a "Fida'i", which is the lowest rank among the Assassins. To get to their targets, the Assassins had to be patient, cold, and calculating. They were generally intelligent and well read because they were required to possess not only knowledge about their enemy, but his or her culture and their native language. They were trained by their masters to disguise themselves, sneak into enemy territory and perform the assassinations instead of simply attacking their target outright. Whenever they did perform an assassination, it was generally within public view, during the daytime. Upon committing an assassination, the Assassin in question would lead any guards attempting to subdue or kill them on a high speed chase, until their pursuers would give up, or the Assassin evade them entirely. If cornered, the Assassin would fight to the death, as suicide was seen and treated as disgraceful and dishonourable among the Assassins.

The assassinations were against those whose elimination would most greatly reduce aggression against the Nizaris, Ismailis and, in particular, against those who had perpetrated massacres against the community. A single assassination was usually employed in favor of widespread bloodshed resulting from factional combat. As it has been noted, they never attacked civilians, and made the effort to befriend those living under the oppression of their enemies. Assassins were also made to be adept in furusiyya, or the Islamic warrior code, where they were trained in combat, disguises, and equestrianism. Codes of conduct were followed, and the Assassins were taught in the art of war, linguistics, and strategy. Assassins never allowed their women to be at their fortresses during military campaigns, both for protection and secrecy. This was a tradition first made by Hassan where he sent his wife and daughters to Girdkuh when a famine was created during the Seljuk siege of Alamut.

In many instances, the Assassins preferred to threaten or terrify their enemies into submission or into a peace accord. They had many ways to achieve this, with the most common being the usage of a dagger, a written note, and freshly baked goods left at the head of a bed, usually with the dagger embedded into a pillow with the note attached to it, and the goods left nearby. If bloodshed could be avoided, it was an option that the Assassins took to.