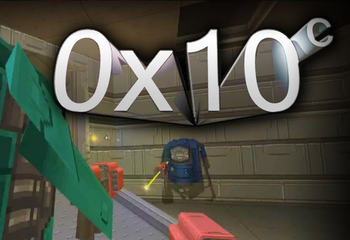 0x10c (pronounced "ten to the c", hexadecimal for 1612, the number of years passed in-story since 1988) was a Science Fiction space sim developed by Markus Persson (a.k.a "Notch", the man behind Minecraft). It was later canceled following developer disinterest. Gameplay footage of a pre-alpha demo can be seen here

The game is centered around a large group of Human Popsicles who find themselves with the unfortunate luck of waking up from their hibernation to find that the computers controlling their sleeping chambers have wildly malfunctioned, awakening them in the year 281,474,976,712,644 CE. To make matters worse, star formation is long over, black holes are everywhere, and the future universe is well on its way to the Big Rip.

What separates 0x10c from other spaceship sims, apart from its lo-fi graphics, is its fully programmable 16-bit emulated computers. Notch anticipates a cottage industry springing up in which programmers develop software — including games, graphical front-ends, and viruses — for the in-game computers.

Alternative Title(s): Ten To The C