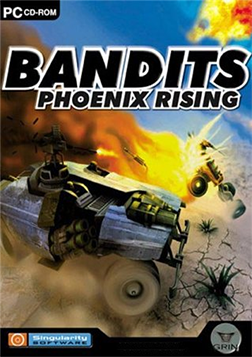 Bandits: Phoenix Rising is a Vehicular Combat game developed by GRIN (who would later go on to create the 2009 Bionic Commando and Bionic Commando: Rearmed) and published by Pan Vision in 2002. It used GRIN's in-house "Diesel" engine, which they used for all their games.

It's After the End. The world is a ravaged, nuclear wasteland, ruled by marauding gangs armed with Weaponized Cars, who scavenge for useful bits leftover from the old world. The last holdout of civilization, or something vaguely resembling it, is the fortress-city of Jericho. It's armies jealously protect a vast fortune in gold from the gangs.

The game's story follows the misadventures of Fennec and Rewdalf, just two of the many titular bandits. In this case, co-leaders of the Wolfpack gang. Always on the lookout for the next big score, they stumble upon a trail of ancient mechanical components that they hope will help them assemble a weapon capable of breaching the walls of Jericho and letting them at the treasure within. What will they do with it? Buy more guns, probably.