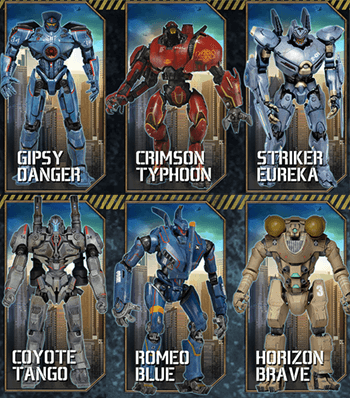 Not pictured: "Complete Badass".
Ted: So, Captain, how'd you get that name anyway?
The Captain: Gave it to myself. A real man chooses his own name.
Ted: Well, pleased to meet you, Captain. I'm Galactic President Superstar McAwesomeville.
— How I Met Your Mother, "Natural History"
Advertisement:

Sometimes, people grow up with boring names, and they imagine more exciting and exotic names for themselves. If you let this person write a piece of fiction, expect this flair for the exotic to show up in a lot of their characters. Try to imagine this person as a baby or as a toddler and everyone calling them this. Try to imagine the parents who would name them this.

It can appear in stories set in a modern-day city, where everyone inexplicably has "cool" names. There's no one named Bill, Todd, or John. It's all "Anubis," "Scar," "Bullet," "Diamond," etc. Even better if these aren't nicknames, but their actual given names. It can double up as a Meaningful Name.

When a video game lets you do this to the characters you control, it's called Hello, [Insert Name Here].

The inverse of Unfortunate Names and Atrocious Alias, while Special Person, Normal Name lies in between.

See also Names to Run Away from Really Fast, Names to Trust Immediately, Xtreme Kool Letterz, Punctuation Shaker, My Nayme Is, Aerith and Bob, Law of Alien Names and Who Names Their Kid "Dude"?

Please note that this trope is for In-Universe Examples Only.