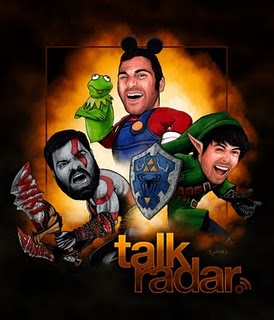 Talk Radar was a weekly video game podcast from Gamesradar.com. It focused on video games but tended to go on long hilarity filled tangents. Anyone looking for an entertaining, if filthy, circus of a podcast, will enjoy it. On top of that it also provided an insight into the field of games journalism, and frequently gave advice on how to get into the industry, even if the hosts complained that that was the most-asked question on the podcast.

The podcast was split into three segments: The Top 7 (where hosts discuss the website's weekly Top 7 list), New Releases (covering that week's new releases, as well as other relevant gaming, and often non-gaming, news) and Community (comprising of a segment on Game Deals, Question of the Week for the site's forum dwellers to answer and phonecalls to the Talk Radar hotline). For four months beginning from Episode 150, after three years of late nights and nervous breakdowns, the podcast was split in two, one on Tuesday containing the Top 7 and New Releases and another on Friday with News and Community stuff. That didn't go well and four months later, the podcast reverted to its weekly format.

Within the breaks between segments, old commercials, interviews, community stuff, sketches either made by the hosts themselves or other people, ridiculously inappropriate promos shilling the podcast to the people already listening or just any old funny nonsense was played. More often than not, any attempt to curb the podcast into a relatively professional course was derailed by free-flowing booze.

You can find the podcast here

but for some reason only reaches up to Episode 147. This podcast also has its own dedicated wiki here

where it links to the much later episodes.

After a number of hosts left the podcast for brighter horizons, they started up a second podcast called Laser Time. Previously teased as a "joke podcast" where Tyler Wilde would answer questions in a suave and strange voice, Laser Time has actually become a beautifully dirty cast-pod for old and new cartoons, 80's and 90's nostalgia and generally whatever the hosts find funny and interesting. It can be found at http://www.lasertimepodcast.com/

Unfortunately, after series of employee layoffs and restructuring of the website (including closing the forums) TalkRadar has essentially ended after Episode 198. Games Radar will apparently have a new podcast at some point, but it is unlikely that it will be called TalkRadar or truly resemble the original podcast. Thankfully, Laser Time

is still going strong and they hosted an unofficial "200th" TalkRadar (they did not call it that, specifically, but nearly the entire original cast reunited) here.

This podcast uses the following tropes: