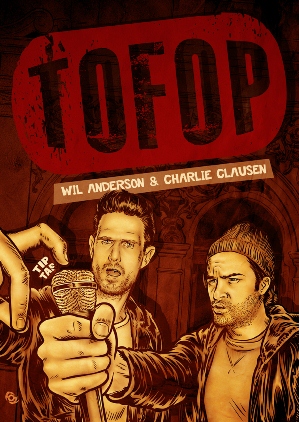 The following episode of FOFOP is classified MA. It contains some course language, some nudity, drug references, sexual references, a sex scene, time travel, terrible Batman impersonations, a Charlie Clausen (pronounced Clausen) shaped hole and mild course language. FOFOP advises that the programme is not suitable for persons under the age of fifteen. Minors must be accompanied by an adult guardian or priest. This is John Deeks speaking.

(short for Thirty Odd Foot of Pod), also known as FOFOP is a weekly Australian comedy Podcast. It was originally hosted by comedian Wil Anderson and actor Charlie Clausen. In 2012, after landing a regular acting role on Home and Away, a long-running Australian soap opera, Charlie was forced to leave the podcast (for some reason his new employers weren't too keen about one of their cast members having long recorded conversations about time travel and prison sex).

Wil Anderson relaunched the podcast in 2013 under the name FOFOP (as in "Faux-FOP"). When Charlie's job prevents him from returning to the podcast, Wil is joined each episode by one or more "Guest Charlies". As of 2017, TOFOP is back on the air, although the occasional FOFOP still occurs.

In 2016, the boys also launched a third podcast which is entirely about Australian Rules Football, entitled Two Guys, One Cupnote which refers to the AFL Premiership Cup, not anything else, you perv, and which runs only during the AFL season. Wil also has another podcast, Wilosophy, which is less overtly comedic, in which he interviews various people about, well, life and their philosophies of it; Charlie has one of his own, also interview-based, called That's Aweson.

Tropes present in TOFOP include: