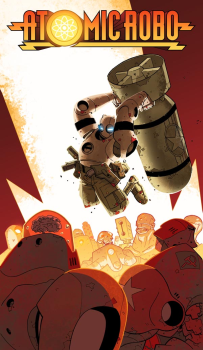 "Y'know how you can watch a documentary about archaeology, and it’s a bunch of university professors and grad students carefully brushing dust from rocks? And then they learn something very important about pottery? Meanwhile Indiana Jones is also an archaeologist, but mostly he runs around shooting bad guys and having car chases?

"Now apply the Indiana Jones model to every other field of study.

(written by Brian Clevinger, of 8-Bit Theater and Nuklear Age fame; and illustrated by Scott Wegener) is a comic about, well, Atomic Robo, a robot built by Nikola Tesla in the 1920s. Given citizenship by the US government in exchange for missions against Nazis and other similar scumbags, he later started Tesladyne, a high tech organization devoted to fighting really weird evil and advancing human knowledge. Along with his elite team of Action Scientists, he travels the world (and further) fighting things on the fringes of human knowledge.

In addition to the main series, there's a spinoff called Real Science Adventures (still written by Brian but drawn by guest artists), which features side characters in non-Robo-related stories. These characters include the Sparrow, a lineage of British spies; the Centurions of Science, an adventuring group that Tesla was a part of before building Robo; and the Flying She-Devils, an all-female crew that fights sky pirates post-WWII.

The series was originally published by Red 5 Comics. When the contract expired, the series shifted to a free webcomic format starting with Volume 10 in 2015. Later in the year, IDW Publishing picked up the license for the physical print versions, with the print versions of new volumes arriving ahead of the webcomic. Real Science Adventures also shifted to a web format in 2016, but only released one new volume and stopped updating soon after; the following volume a couple years later returned to being print-first.

No relation to the 80s video game.