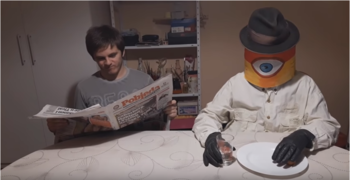 A normal morning for a not-so-normal duo. note Rata on the left, The One whose Shape was Snatched on the right
"Are you maybe aware? Every time you post a comment asking Rank10 to do a 'Legacy of the Worthy', he takes a shot of brandy. He is lightweight, and due to this, he has developed genital ulcer. He is dying, and you are killing him."
Advertisement:

is a YouTube channel that focuses on Yu-Gi-Oh! content, run by a Montenegrin (Montenegrin Serb, as seen by the Trrrilling Rrrs) player Ratamakafon, or Rata for short. It is known in the community for its acerbic and humorous style, analysis of unrecognized parts of the game, and focus on entertainment and editing. The channel is particularly notable for its "Legacy of the Worthless" and "Archetype Archive" series, which focus on reviewing the various archetypes in the game, specializing in either extremely bad ones (in the former case) or interesting and obscure ones (in the latter case), while "Support Report" covers new support cards for archetypes that were already reviewed in the former two series. The channel hosted the "War of the Worthless" tournament, where duelists using all the archetypes reviewed in "Legacy of the Worthless" fought it out.

It also often does skits, focusing on both Rata and the various mysterious things in his life that prompt him to spend his time talking about children's card games, including a being called The One Whose Shape Was Snatched

and Ojama Lime, an Ascended Extra Butt-Monkey who usually appears at the end of Archetype Archives as The Stinger.note Both are voiced by Rata's fellow collaborator Jimbles. The channel takes its name from the Rank 10 Trains archetype, an old favorite of Rata.