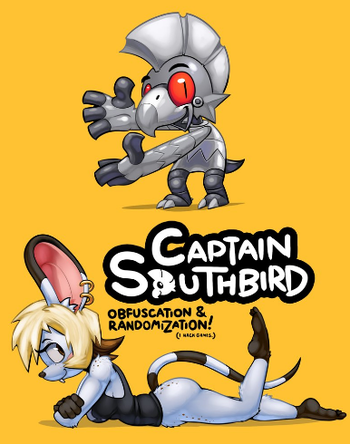 Southbird's avatar, posing next to Bella.

Captain Southbird is a content creator on YouTube, better known as a former video editor for Vinny of Vinesauce fame. On his own channel, Southbird’s specialty is hacking and editing games, using a self-programmed tool called Tomodachi Munger, which was named after and originally designed for Tomodachi Life. He focuses on applying scripts to coding to distort and swap out in-game text; sometimes it’s obfuscated with repeated translations, and other times it’s randomly replaced with bits of YouTube comments, Reddit posts, movie scripts, and snippets from various websites. Comedic moments abound, and so do some coherent stories.

, which he occasionally uses to stream obfuscated games before cutting them into highlights. Teckworks (the thumbnail artist for most of Southbird’s series, and occasional co-op gaming partner) has a YouTube channel here

, though his other pages cannot be linked to due to being Not Safe for Work.