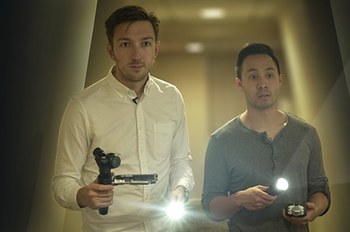 There are professionals, and then there are these guys.Note  Shane and Ryan respectively.
"This week on Buzzfeed Unsolved we look into the mystery that's been plaguing the internet: is TV Tropes capable of ruining one's life?"
Advertisement:

BuzzFeed Unsolved is a Web Video live-action/documentary series created by Ryan Bergara for BuzzFeed that ran from 2016 to 2021. Covering both True Crime and Supernatural unsolved mysteries, it was hosted by Ryan and Shane Madej, with whom Ryan maintains a very... intense friendship. Each serves as the resident believer and skeptic respectively.

The series premiered on February 4, 2016, as part of BuzzFeed IRL. The first episode, The Mysterious Death of the Somerton Man, began Season One of the True Crime segment and was hosted by Ryan and his friend Brent Bennett, who played the role of skeptic. Brent stayed on for much of the first season of True Crime, and co-hosted the first episode of Supernatural, but was replaced by Shane in late 2016.

Unsolved updated on Fridays, with post-episode Q&A sessions (known as Postmortems) being posted the following Wednesday. The True Crime segment has run for 5 seasons, with the 5th season premiering on March 21, 2019. The series began on one of Buzzfeed's subsidiary YouTube channels; Buzzfeed Blue, but from the 5th season of the Supernatural segment onwards, the show switched to a new Unsolved-only Buzzfeed channel, Buzzfeed Unsolved Network

Also check out Ruining History, another show on Buzzfeed that features Shane and Ryan. As of 2020, Ryan and Shane have both left Buzzfeed to found their own company, Watcher Entertainment, alongside fellow Buzzfeed alumni, Stephen Lim. On June 7, 2021, Ryan announced

that the upcoming 8th season of True Crime would be the final one, along with a 7th and final season of Supernatural set to premiere on October 15, 2021. The final episode aired on November 19 2021 and was followed up by a behind the scenes documentary Buzzfeed Unsolved: The Making of the Final Investigation. A Spiritual Successor series, once again starring Ryan and Shane, called Ghost Files

is currently in production on the Watcher Youtube channel and premiered on September 23, 2022.

Let's get into it:

It seems that despite all the evidence pointing to it being true, the theory that this site will ruin your life is still up for debate, and will likely remain Unsolved.