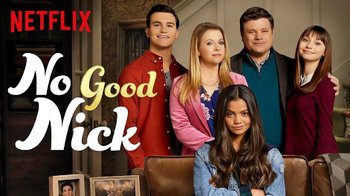 No Good Nick is a Netflix original Dramedy Sitcom centering on Nicole "Nick" Franzelli, a teenage Con Artist who claimed to be a Long-Lost Relative whose parents recently died to insert herself into an upper-class family, The Thompsons. The mother Liz (Melissa Joan Hart) runs an Italian restaurant and father Ed (Sean Astin) works at a bank, while their children Jeremy and Molly are high school aged. Nick's real goals are to use their connections to scam them out of money. However, she finds herself growing increasingly attached to them as she spends more time in their home.

WARNING: Despite being a sitcom, No Good Nick has a heavily serialized plot with many dramatic reveals and twists. Here there be spoilers.