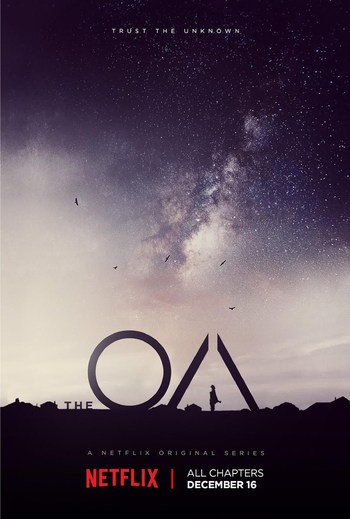 The OA is an original science fiction series that ran for two seasons, from 2016 to 2019. It was created by Brit Marling and Zal Batmanglij in collaboration with Netflix.
Advertisement:

After disappearing for seven years, a woman named Prairie Johnson (played by Martling) suddenly resurfaces in a YouTube video where she's seen jumping from the Golden Gate Bridge. She is reunited with her parents, who notice that she's a very different person from what she used to be - the most noticeable difference being that she used to be blind, but now can see perfectly. She's also developed an aversion to touch, has mysterious scars on her back, and goes by the name "The OA".

The OA refuses to speak to the FBI or her parents about her experience, though she claims to be on a mission to save others. In order to do so, she needs to find five people willing to not only believe her, but also willing to help her.