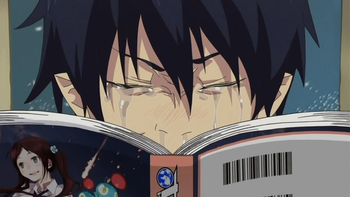 Proof that the remaining 10% is worth dying for here:

Do warn when a fanfic may head into sexualnote please note this includes all sexual activity, not just homosexual or bisexual, including het. or non-canon territory. Some people just don't like it, and as we all know, Shipping is Serious Business.

Stories focused on the family and the friendly relationships of the cast. Plot-focused stories or light day-in-the-life stories. Pretty much anything that isn't focused on romance.
General Fics

The End of the Beginning

now with its own page

Eating is a Lot of Work

The Devil Inside His Head

Tail's Out of the Bag

Sequel to Tail's Out of the BagAll At Once

Alternative Universe. The characters are written into a different world/universe than the one they are typically from.
Alternate Universe

by Shinigami of the Elder Gods

Series to: 'To Be Good'Tear Me Down

In Which The Author Tortures The Characters (Oneshots, Fic Ideas and Requests)

Series to: A Lily, Unplucked A Mother's Touch

Stories focused on the romantic relationships between the cast.
Shipping

The House That Fear Built

The Thing about Girls

Inheritance of Cards and Demons

If They Ever Should Meet

Charges of the Flame Alchemist