Fanfic / Inheritance of Cards and Demons 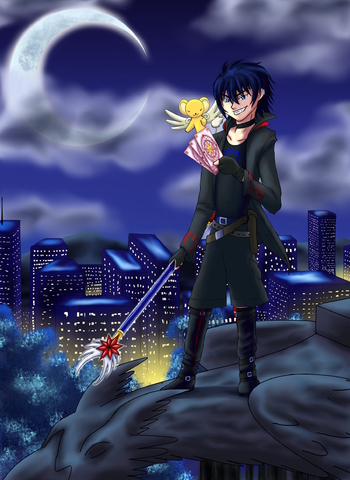 When Kinomoto Sakura died, she set it up so that her Cards would go to the person who not only deserved them, but needed them. Vanishing across dimensions, they reappear in Assiah. Just in time for new Junior High School student Okumura Rin to find them. And so the cycle begins again.
But when the new Master is also the Son of Satan, nothing is going to be easy.
— Series Description
Advertisement:

Inheritance of Cards and Demons is a Blue Exorcist and Cardcaptor Sakura fusion crossover, written by Love Psycho

Rin, the 12-year-old protagonist of manga series Blue Exorcist, finds a mysterious but beautiful pink chest in the basement of the monastery. Curious, he looks inside to find a book with the name "Sakura" on it. Rin accidently releases the magical cards, originally created by Clow Reed, onto the world, he is tasked to become the next Cardcaptor, and now has to collect all of the cards. He faces many challenges on his journey to become Sakura's successor both magical and mundane.

The story balances the normally disparate genres "shounen" and "shoujo" through a mix of Rin's brash hero personality and heartwarming, occasionally hilarious or heartbreaking character development.

In addition to the three main arcs, there is a series of short side stories. The first, Golden Girl, deals with Rin’s shenanigans during Golden Week after Chapter 36. The second, Normal Does Not Exist Here, takes place shortly after the Judgement during the school summer festival but events conspire to keep Rin from having a break. The next three side stories take place after IoM and focus mainly on Rin and Ying Hua repairing their friendship and bonding over magic. Two more, taking place during the Kyoto Arc, are about the evolving relationship between Rin and Renzo.

and Love Psycho's shared tumblr blog, containing Worldbuilding and other pieces of backstory, can be found here

Inheritance of Cards and Demons provides examples of: