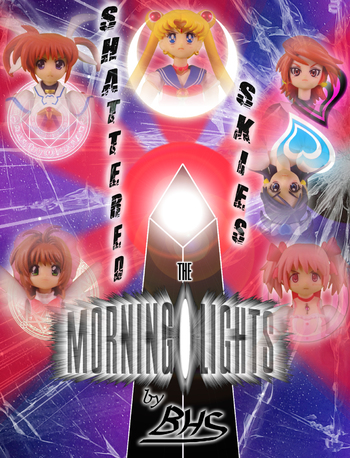 "It's all gone wrong..."
Advertisement:

Usagi Tsukino, Sailor Moon. Sakura Kinomoto, the Cardcaptor. Nagisa Misumi, Cure Black. Nanoha Takamachi, the Ace of Aces. Madoka Kaname, the Law of Cycles. What happens to bring the five most legendary Magical Girls together from across five universes, and does even their combined strength stand a chance of preventing omniversal annihilation?

A war for existence itself has begun, and it's all gone wrong...

The story begins with Joker, alive and aware inside Emperor Pierrot's body during that series' final battle, sharing his master's destruction at Smile Precure's hands. Utterly broken by the experience, Joker floats alone within the void... until he meets Chaos, the Sentient Cosmic Force that is the origin of evil in every universe. From it, Joker gains knowledge of The Multiverse and the other magical girls out there, and of a constant, eternal cycle of the forces of light battling the forces of darkness... in which the darkness always loses in the end. As Chaos prepares to absorb Joker's essence back into itself, Joker suggests a way that the cycle might not only be broken, but that their side could win... All Chaos has to do is spare him, rebel against its fate and function, and allow Joker return to life and wage war on all reality on its behalf.

Shattered Skies: The Morning Lights is cross-posted on Archive of Our Own (here)

. The first fifty-eight chapters are archived on FanFiction.Net (here)

As of August 2018, the story has a Recursive Fanfiction of its own called Mirror Shards, written by Storyteller222, which can be found here

A Spiritual Successor of sorts to Stars Above, the previous Magical Girl Crossover by the same author. Also see Respect.

Warning: all spoilers for Acts I and II of the story are now unmarked. In addition, it's highly recommended to be familiar with each of the five 'verses involved, as most of them take place post-series.

Has absolutely nothing to do with the fourth Ace Combat game.