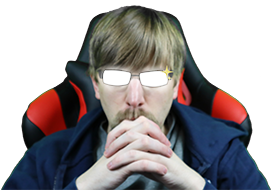 , and Socko the Happy Turtle (only on Tuesdays), is a geek, Nightmare Fetishist, and Japanese culture enthusiast with a weird sense of humor who lives somewhere in Virginia. TVTropes has ruined his life on more than one occasion. He's an absolutely hopeless Serial Tweaker, for one thing. He created the pages Tasakeru, Kudzu, That One Achievement, Stars Above, Nil, My Little Unicorn, Respect, HappinessCharge Pretty Cure!, The Changeling of the Guard, and Shattered Skies: The Morning Lights.
Advertisement:

In Fall 2011, he entered the wonderful and terrifying world of Fan Fiction (*DRAMATIC CHORD*) with his first serious effort, Stars Above. Co-written by fellow Onioneer and co-conspirator Forzare and loosely based on a long-running RP hosted on the TV Tropes forums, Stars Above is a Madoka Magica / Lucky☆Star Crossover fic, the first of its kind, and is fucking awesome, in his totally unbiased opinion. He also wrote another Crossover called Respect, and a third called Shattered Skies: The Morning Lights, currently in progress. His FF.net page can be found here

, while his AO3 page is here

In 2017, he began a You Tube review series called Silent InvenTOYry

, covering Japanese action figures, model kits, and collectables. As its title implies, the series is completely dialogue-free, and the reviews are done via captions, music, sound effects, and snark. The series lasted slightly over two years.

He finally got tired of the many ridiculous things he wrote about himself in previous edits of this page, and decided to make it slightly more coherent.

His interests also encompass multiple sci-fi, fantasy, and comedy series, and writing about himself in third person.

Various Stuff That I Find Awesome

Vandalism Section, because everyone else has one