Fanfic / The Changeling of the Guard 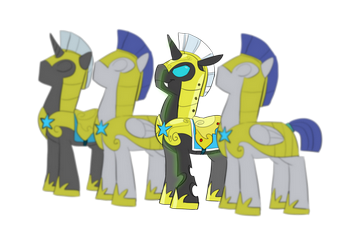 Not your ordinary Changeling.
"I have always been... different. Special. Aberrant. I possess less of the ability to control my emotions. Curiosity compels me, and not merely towards outside of the hive. Amongst our kind, lack of fine emotional control is embarrassing, but tolerated in some respects. Hunters are allowed more leeway with anger, as it bolsters offensive capability. Nursemaids to the hatchlings are encouraged to be affectionate, to ensure that the young are well fed. Scouts are driven by curiosity, the urge to see more. Gatherers... Well. Much is presumed about the gatherers. But rarely do they spend much time within the hive. My curiosity, however, was for how things work. This may seem like no crime. However, the hive runs like the gears of a clock. Our tasks are completed in the manner they were explained, and no more. One does not simply alter the schedule. And the hive has little tolerance for unimportant questions. Curiosity does not warrant concern from a drone, especially one tasked to expansion of the nest, as I was..."
—Idol Hooves
Advertisement:

The Changeling of the Guard

is a My Little Pony: Friendship Is Magic fanfic by VDrake77. It is the story of Idol Hooves, a very unusual changeling.

After being exiled from the hive by Queen Chrysalis for the crime of questioning the rigid protocol of changeling society, Rogue Drone Idol travels Equestria in search of his own identity, meeting other ponies along the way and attempting to satisfy the curiosity that got him exiled in the first place. The problem is, drone changelings like Idol aren't exactly equipped to blend in for long periods of time... and of course, his natural form would be most unwelcome among ponyfolk. Is there any place in Equestria that Idol can truly call his own?

Yes there is: in Princess Celestia's Royal Guard.

Initially set a number of years before Luna's redemption, the story eventually caught up to the events of A Canterlot Wedding and beyond.

A sequel called "There's Something About Merry" is now in progress.

A sequel called "Changeling Perspectives", an anthology of short stories from the perspective of Idol and others, has now begun and can be read here

Idol and Topaz have a Character Blog, "Out of Idol Curiosity", which can be found here

As of September 2015, The Changeling of the Guard is #1 on Fimfiction.Net!