Fanfic / Change Queen Of The Hive 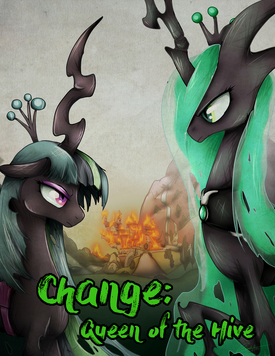 Cover art once again created by Jesuka on Deviantart

Change: Queen of the Hive is a My Little Pony: Friendship Is Magic fanfiction by tom117z. You can read it at Fimfiction.net

. It is a sequel to Change.

There are many changeling hives spread throughout a large portion of the world. Wherever love energy is going to be found the changelings will pursue it. But now, one by one, they are disappearing. Many hives located at the very outer edges of changeling inhabited lands are vanishing without a trace, Twilight Sparkle's family history has returned to haunt them all as something is hunting the changelings down. But how? And for what purpose? And more importantly, what does this mean for Queen Twilight Sparkle and the rest of the changeling race?