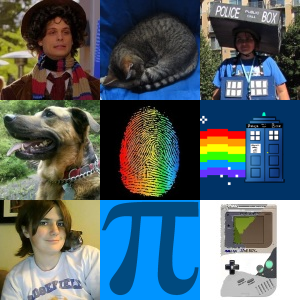 Which do you associate me as?

NOTICE: THIS TROPER ISN'T ON THIS SITE ANYMORE.

Lit Professor: Class, do you guys know what I mean when I say a "trope"?
(blank stares from class)
Me: (raises hand)
Lit Professor: Yeah?
Other Student: Clichés.
Me: Story-telling conventions.
Lit Professor: Excellent! Tropes are archetypes. Maybe like a hero or other traditional character types. Class, can you tell me what the trope of an aunt is? What are the traditional roles of an aunt?
Advertisement:
Me: (thinks about banging head on desk)
—I really wish I was making this up....

Welcome! I am Indigo12ash but you can call me Indigo, Indie, Indy, Indi, or whatever you please. I mean, Hopey calls me Indiyo and Pigey calls me Jonesy. Like most of the tropers here, I am a young nerd. I'm an 18-year-old lesbian on the west coast of the US.

Discovered this site around 2011 but didn't make an account and my first edit until Feb 8, 2012. I haven't run anything through YKTTW and I used to not use the forums all that often. I know there are some tropers with a list of tropes they named or other resume-esque things on their page. Well, so do I, since I'm working on becoming an active member of the community.

It was about August 2012 when I began posting in Yack Fest and got absolutely addicted to it. I'm not even on the wiki side anymore.

Now with a quote page.

NOTE: If you wish to vandalize me, send me a PM with what you want to add and I'll add it to the bottom. Thank you.

(Note: This is what I can remember at the moment. Also, I didn't move the wicks for all of these. Some of them still have wicks to be moved. I just moved the pages.)

I was bullied a lot when I was younger because, I am just weird. I'll admit it, I have Asperger's Syndrome, as does my girlfriend. Before you ask, I am actually diagnosed and don't use it to be an asshole on the internet. I can't STAND IT when people use any treatable or fightable disease, disorder or whatever as an excuse to not be able to do anything. Example: "Oh, I have a stutter, I can never talk normally". That is bullshit. There are plenty of stories of people overcoming certain conditions. Read Front Of The Class by Brad Cohen to find out how he was able to become a teacher, who has Tourette's. Yeah, no excuses.

Another one of the things that bugs me is when people use "Asperger Syndrome" or "Asperger Disorder". It's "Asperger's Syndrome". Hans Asperger is the person who noticed it in his patients back in 1944. There is a difference between a syndrome and a disorder. A syndrome is something characterized by multiple symptoms and a disorder is a disturbance in mental or physical health.

Sorry for the rant.

TV Tropes in general
In other news, TV Tropes is the greatest place in the entire world. I was hanging around here since about 2011 but finally made an account early 2012 because there were some annoying typos I wanted to fix. One of my first edits was on Curse Cut Short because someone had typed "Jeniffer" instead of "Jennifer" or even "JJ" for that matter. That was 8th Feb '12 9:33:49 PM.

And yes, it has ruined my life. Although, one of the most annoying things about this site is that it's difficult for me to explain the concept to my friends. I even showed one of my friends the home page and she still says "I don't get it". Oh well, her loss. Whenever I am on this site, my mom thinks I'm "fanfictioning".

Then there are those times when I trope real life. I called something Snark Bait once and got funny looks for it. Same thing happened when I whispered "Ho Yay" while watching Torchwood. My mom asked me to explain... That wasn't fun. There are also times when I mention trope names and I got a "I know, right?!" I called one a guest speaker at my school a Misplaced Kindergarten Teacher and got very positive reactions from it.