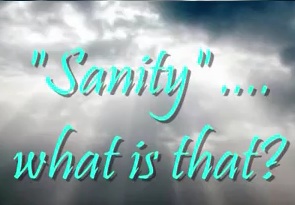 I dunno...
iSanity, it's like walking on air, or actually living a carefree life... I'm fine. Really (smiles) :3
Advertisement:

I'm Sabrinadiamond, that is my online name from the Land Down Under

! I frequent the trope page quite regularly. I am a fan of most anime, including Animorphs and The '90s, I am a fan of Psychological Horror, Pony Tale and Most Fanfic Writers Are Girls. I still don't get the Seven-Year-Rule though. I have a creepy monotone sometimes. I draw in slightly 'animesque' fashion, but try to have some mythological and historical influences... I have a slight complex. I sometimes suffer from food preferences

I'm a firm believer in reincarnation

now. I also need an Anti Poopsocking... I'm a beginner Game Maker as well and pretty Genre Savvy after watching countless TV shows and cartoons (and must employ MST3K Mantra to any show I like to watch). My fave historical person is Queen Cleopatra VII. My primary Seven Sins would be Sloth and Gluttony

and Envy. Although I'm suffering from a Heroic RRoD right now. I have trouble understanding some puns and metaphors (especially in book titles)... I'm one of The Dreaded, because somehow... I'm a Kuudere

Oh yeah, and my birthday is also Cthulhu's birthday

I've also been in and out of hospital more times than I can remember... Recently I'm a bit of a medication-addict. I am omnipresent on the net, everywhere at once, also known as safirediaz, sabrina_jewel and others... :D I sometimes suffer from Unstoppable Rage (because for me- nothing is the same for me anymore)... I wrote many essays on novels and had to cross-analyze them endlessly.

I am the creator of the T Vtropes Dragon Fable page (and edited the Parallax page), just because I like the Tetris Effect so much. I like Pokemon, Nightmare Fuel and Beat Still, My Heart, but I am scared of The Sixth Sense. I like anything to do with tentacles. Very much so. I'm a little bit of an Stepford Snarker depending on my mood

that day. Sometimes I can be an emotionless

Some of my darkness came from reading Stephen King- I need The Power of Friendship again... My theme song?

I use this site as "inspiration" for my stories. I am a fan of macrophiliac (local vore fan), Fantastic Voyage, Journey to the Center of the Mind and Fetish Fuel... Anyone want to create a forum game based on these?? I have a Tweet and a Deviantart

. I used to ride tamed horses for my... disabilities. I still love them. I love me a good Karmic Twist Ending.

Although I like dragons and Our Werewolves Are Different. I like Doctor Who David Tennant. I watch Noir, Loveless, Bokurano and Revolutionary Girl Utena. I also go through Wangst and Creator Breakdown when my stories become a Dead Fic. (PS: I have mild... CP.) I've only liked anime since 2005... I personally think that sometimes Dark Is Not Evil. I admire the guy Sisyphus who rolls a rock up a hill repeatedly.

I like making Mind Screw, Cliffhanger and Freud Was Right. I like stories about High Fantasy and about tiny peope put in strange stituations. One day, I want to Ascend to a Higher Plane of Existence and be like Irresponsible Captain Tylor. I am a big fan of Petting Zoo People and want to be a furry like in 'Loveless'... Sometimes I feel like the Whale from The Hitch Hikers Guide To The Galaxy, Please, Don't Leave Me!. My parents state "You watch too many movies", I tend to disagree. xD On the Insanity test I got 38.5 (I think)... I listen too much Vocaloid? Sometimes I feel as insignificant as a mayfly

I am currently working on another The Simpsons Deconstruction Fic called A Clockwork Margaret which is a slight parody of A Clockwork Orange. More on this soon. I also like gelato and the tune Green-Sleeves I might have a slight bit of Asperger Syndrome, but I have a Hurricane of Puns, so that can't be too bad :3 Or Is It. RAWR! *eats your soul music* Om nom nom.

Thankfully my mind is slowly mending after two years+ of trauma.

I now have a You Tube Channel, but please be kind.

I am the author of the fanfic Officer Misako

and The Caged Phoenix saga

About Yours Truly
More about 'Yours Truly' - from F to H
A Guide To 'Yours Truly' - From I to Y
Fanfiction and stories
Anime I like
(list of anime:)
Other thingies I like
TV shows and Movies I watched
Just for fun?!
Mary Sueness: Description: Half werewolf, quarter dragon, 1/8 magical girl, 1/16 Time lord, 1/32 pokémon, 1/64 Chosen One, 1/128 Titan and can turn into all of these. (She's also the Last Of Her Kind.) Can shoot green fire from her hands when she wants to...

In 1989 the Intergalactic Star Fleet from another dimension had lost all of their ships and asked Sabrina to help, and she built one with her own hands. Stephen Hawking who was cured and turned into a blonde fell madly in love with her - because he couldn't possibly match her genius, but unfortunately for him she only has one true love, a classmate called Matt who is also the Chosen but the Gods decided to make Sabrina it instead when they heard.

She is also a Jedi who was secretly trained by Yoda and Mace Windu who also fought over her and Dumledore's granddaughter and Neo's classmate who taught him everything and she resurrected Aslan and helped to find the final clue to the Da Vinci code and BFF with Nancy Drew. (Courtesy of Vreeee)