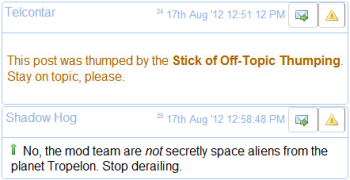 The Left Fielder is someone who will enter a discussion already under way and start talking about something completely unrelated. Sometimes, what they say will have nothing to do with the thread it's in, such as: "Have you ever noticed that a lot of rock stars from the '70s look like Jesus?" in a thread about whales.

The term comes from Baseball, though the exact origin of how the position of left fielder or that area of the playing field came to mean "unexpected" or "strange" is disputed. A commonly-cited origin is from the Chicago Cubs' old stadium at the West Side Grounds, where beyond the left field stands sat Cook County Hospital (now the University of Illinois Medical Center), a mental institution; thus, crazy things being screamed by patients could be heard coming out from left field by fans.

More often, the subject is switching to something that is loosely related to the topic, but not actually relevant. Such as when they post the same question in a thread about the life of Jesus. Either way, it's an invitation for the members of the thread to spend the next three pages blathering inanely about whether or not any of The Beatles look like Jesus, or, for that matter, whether The Beatles really count as a "'70s band" in the first place.

Eventually, it will get to the point where someone who hasn't been following the discussion will ask, "Wasn't this supposed to be about Whales During the time of Jesus' life, or something?" and all the other posters will look sheepish and go back to what they were talking about (with a few still passionately discussing whether Led Zeppelin was better than The Beatles). This is the reason many fora have strict rules against "off topic" posts.

Some Left Fielders are Trolls derailing threads for the sheer fun of it. Others are Single Issue Wonks who can twist any subject into a rant about their personal obsession. Most, however, are just Noobs who don't know any better and just really want to discuss the thing they are changing the subject to. Most message board users have thrown something from left field a few times without realizing it, and some do it constantly. Long time forum users generally learn to just start a new thread.

WebBBS-style forums partly solve this problem, as the appearance of a Left Fielder can't do more than simply split off a parallel subthread of the main thread; but it can still be confusing if nobody bothers to change the title of the subthread.

See Derailing for when this is done on purpose with the intent of changing a discussion.