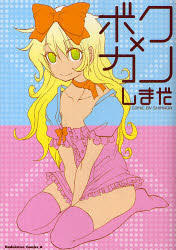 Boku x Kano is a short-lived manga by Shimada, which ran in Shonen Ace from February to August 2009.

Hayashi Shoutaro is a below-average high school student with a hopeless crush on the class idol, Kanda Yayoi, and no ability to act on it. That is, until his otaku older sister, Midori, forces him to crossplay (a subset of Cosplaying where the player dresses as a character of the opposite gender) at a merchandising event for their favorite anime in exchange for a ticket to attend. Hesitant at first, Shoutaro quickly gets into the crossplay just in time for none other than Yayoi to show up and befriend his new female persona, quickly named "Shouko." Finding himself to actually have the guts to talk to Yayoi in his guise as Shouko, Shoutaro begins to build a friendship with Yayoi, who quickly develops a crush on Shouko. In other words, it's a Love Triangle with only two people and crossdressing.

This Manga Contains Examples of: