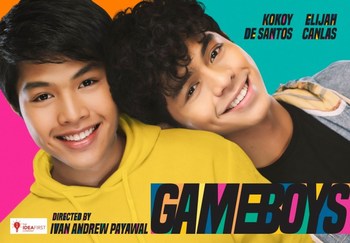 from the Philipines. It is directed by Ivan Andrew Payawan, written by Ash M. Malanum, with Perci Intalan and Jun Lana serving as executive producers.

situation in the country's largest island.

Filmed on a tight budget and minimal marketing, amidst local quarantine restrictions

, the series exploded in popularity in both local & international scene via the BL community

. The surging popularity pushed multiple extensions of the story from 4 to 13 episodes, with a GL spinoff (Pearl Next Door), second season, and movie announced for the future.

There is also a Netflix Philippines produced "Level-Up Edition", reshot and with additional footage, correspondence, and "Vidgram" stories added for longer episodes.

Notable for defying many toxic BL tropes (e.g. Gavreel is a tease but for the most part honors consent, None of the gay couple has to be "the wife", the main female character is actually supportive, etc.), as well as touching upon timely health & societal issues within it's narrative.

Not to be confused with the Nintendo handheld console

Available to watch with subtitles (in A LOT of languages, English included) in The IdeaFirst Company's Youtube Page