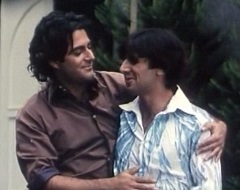 You Killed My Father...
Advertisement:

Amir (Mohammed Reza Golzar) is the son of a wealthy Iranian man, who is all set to go study in America when he accidentally hits an old man with his car. The old man goes into a coma, and Amir is forbidden from leaving the country until either he wakes up, or he can come to a settlement with the man's family.

The man has only a son, Hassan (Amin Hayai). While he is initially, of course, furious with Amir, he warms up to him when Amir helps him to impress a girl...