Series / Get the Picture 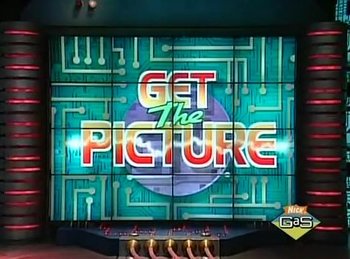 Nickelodeon Game Show that had two teams of two kids identifying pictures on a large 16-panel screen, hosted by Mike O'Malley. Each round featured a main picture, parts of which were slowly revealed as teams answered questions correctly.
Advertisement:

The first round was called "Connect the Dots". A series of dots were shown on the screen. For every question a team answered, they received $20 and chose one of the 16 panels, and the dots in that box would be connected to form part of the outline of the object in the picture. Guessing the picture correctly awarded $50, guessing incorrectly cost a team $20, and not guessing at all did not affect a team's score.

The second round was called "Dots" and was based on the classic drawing game of the same name. In this round, the corners of each panel were marked with a dot ranging from 1 to 25 in order. Each question in the round had a two, three, or four part answer. A complete correct answer awarded the team $40 and the opportunity to use as many lines as parts of the answer to connect neighboring dots on the board. Every time a box was formed, the piece of the picture it enclosed was revealed. In this round, guessing the picture was worth $75, with an incorrect guess still costing $20.

Additionally, in each round there were one or two "Power Surges", which if found required a team to complete a mini-game in order to complete the square and have a guess at the board.

The winning team advanced to the Bonus Round, "Mega Memory", for the chance to win additional cash and prizes.