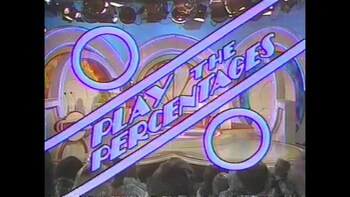 Short-lived Game Show created by Jack Barry/Dan Enright and hosted by Geoff Edwards which ran from January 7 to September 12, 1980.

The original format pitted two married couples against each other. They were asked a general-knowledge question which had been asked of 100 people, and each team offered a guess as to how many people they think got it right. Whoever was closer got points equivalent to however many indeed got it right, and could challenge for the remainder (e.g., if 40% of the people in the survey got it right, the next question would offer 60 points) if they answered the question correctly themselves. Alternatively, they could force the opposition to give an answer. Play continued until one team reached 300 points. If anyone guessed a percentage on the nose, they won the game right then and there.

Partway through the show's run, the maingame was completely overhauled and basically became a clone of 21. Here, two solo contestants were pitted against each other and asked questions in three different categories, one of which was always "Pot Luck". Question values ranged from 10 to 90 (that being the percentage of the survey that got the answer wrong), with a goal of 250. Initially, only Pot Luck questions were jump-ins, but this was later changed so that all three categories were jump-ins.

As per B&E custom, five wins awarded a new car.