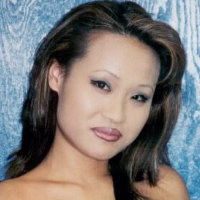 "Oh, to be a cameraman tonight."
—Joey Styles, after a cameraman got a close-up of Kimona Wanalaya.
Advertisement:

Kristina Laum (born November 23, 1976) is a retired Professional Wrestling valet known for her time in ECW in 1996 as Kimona Wanalaya and in WCW in 1999-2000 as Leia Meow. As Kimona, she was the Face-turned Beulah McGillicutty's replacement in Raven's Nest. (See Establishing Character Moment below). After leaving following ECW Hardcore Heaven 96, she worked for a time for Jersey All Pro Wrestling but otherwise disappeared until WCW Starrcade 99, when she was revealed to be the cheerleader for the reunited The Varsity Club (Kevin Sullivan, Rick Steiner and Mike Rotunda). After that ended, she worked as the valet for Jung Dragons (Kaz Hayashi, Yang and Jamiesan). She retired after WWE did not pick up her contract after buying WCW in 2001.