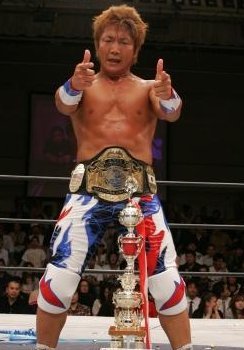 Ikuto Hidaka (born August 5, 1972) is a Japanese Professional Wrestler best known for his work in Pro Wrestling ZERO1. He started his career in shoot-style promotion Battlarts, where he honed his kicks and submission holds and got to be sent to ECW for a short time. Upon returning to Japan, he joined Michinoku Pro Wrestling and became Dick Togo's henchman, but the two left for Shinya Hashimoto's rising project ZERO-ONE in search of greener fields. While Togo left early, the promotion became Hidaka's home and allowed him to develop. Hidaka turned into ZERO-ONE's junior heavyweight ace and the company's answer to the contemporaneous five star match stylists from Pro Wrestling NOAH, a man who could work any style and against anybody he needed to give out great bouts. He wrestled in many of promotions while representing ZERO-ONE, won multiple championships both solo and along with a variety of tag team partners, and turned over the years into a trusty company man who had connections to everybody in the pro wrestling world and could make any dream match happen. He also had a Mixed Martial Arts bout against one of his friends, Takafumi Ito, and helped Battlarts to remain alive, if not as a promotion, at least through its former members.