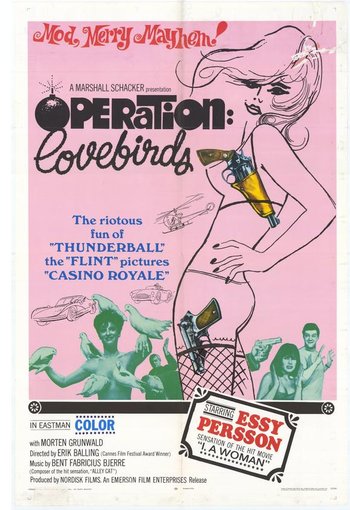 Operation Lovebirds (original title Slå Først Frede) is a 1965 Danish James Bond spoof movie, starring Ove Sprogøe, Morten Grunwald and Poul Bundgaard and directed by Erik Balling. The same team would go on to make the hugely popular Olsen-banden movie series, that in many ways can be seen as a Spiritual Successor to Operation Lovebirds.

Frede Hansen (Grunwald) is a happy-go-lucky novelty salesman, who is mistaken for a secret agent by the evil and mysterious Dr. Pax and The Dragon, the murderous Eastern European Kolick (Bundgaard). Real secret agent Schmidt from Danish Intelligence (Sprogøe) recruits Frede, hoping to use him as a decoy to flush out Dr. Pax. The mismatched duo start a race against time to find Dr. Pax and stop him, their only lead being the beautiful Swedish pigeon trainer Sonja (Essy Persson) and her lovebirds.

Operation Lovebirds won the Bodil Award (the most prestigious Danish film award) in 1966 for Best Picture, and Poul Bundgaard won the Bodil for Best Actor in a supporting role for his portrayal of the sinister Kolick, who gradually breaks down because of his constant failure to kill Frede.

Received a sequel in 1966 by the same director and with much of the same central cast, named Relax Freddie (Slap af, Frede!).