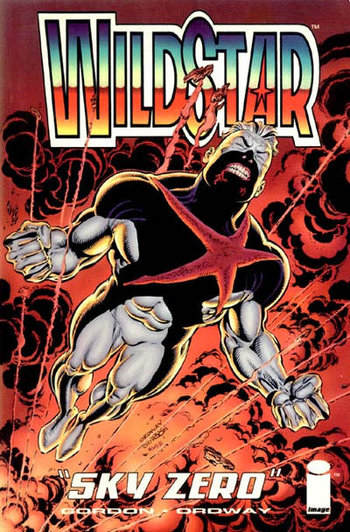 Wildstar is a Comic Book series created in 1993 by Alan Gordon.

Michael "Micky" Gabriel was once just your average teen, who's father worked for Sky Tech Laboratories. That all changed, however, when, following arriving with his father in the middle of a wreck site, Micky happens upon a man in a black-and-white suit with a star on his chest.

From there, Micky gets involved in a bizarre adventure involving Bounty Hunters, a Stable Time Loop, and the discovery that the guy he found was his future self. It all ends with Micky gaining an Alien Symbiote that turns him into the Superhero Wildstar.