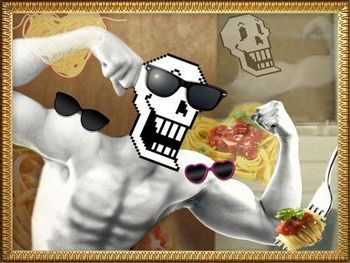 "Papyrus, what's your favourite food?"
Alphys: i spend all my time browsing memes now. it's my element
Advertisement:

Given its wacky sense of humor and immense popularity around the Internet, it only makes sense that Undertale has spawned a large amount of memes.

open/close all folders
Sans and "Megalovania"
Sans and his battle song are full of memes, to say the least.
Specific characters
Of course, other characters of the game are as popular and memey as Sans is.
Advertisement:
Other
The rest of the game also has its part of memetic moments.
Fan Works / Fandom
Of course, being fan-made doesn't mean you aren't a meme.
GAME
OVER