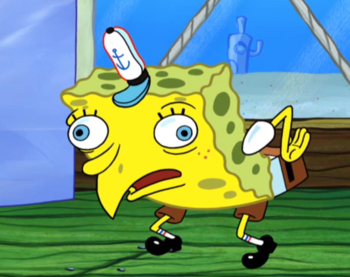 tV tRoPeS wIlL RuIn YoUr LiFe
SpongeBob is the only guy we know that can have fun browsing memes...FOR TWELVE HOURS!!
Advertisement:

A collection of memes that have generated either from or around the show. Please remember, if you add a meme to the page, please include an explanation as to why it's a meme. Zero Context Examples are not allowed on TV Tropes.

Please add entries in the following format:
open/close all folders
General and Meta
Episode-specific
Advertisement:
Patchy: That's it? That's the meme page? THAT WAS JUST A BUNCH OF CHEAP FORCED MEMES!
Potty: What a rip.
Patchy: DRRRRRRRRRRRRRRRRRRRR!! TV TROPES BETRAYED US!!