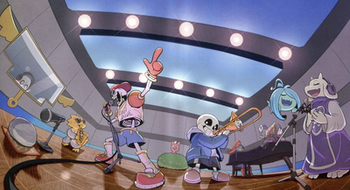 16-bit beats mixed with head-banging awesomeness.
"Undertale is an emotional roller-coaster... and these are the tracks!"
— videogamedunkey, Dunkey's Best of 2015

As a game made by Toby Fox, it's no surprise that the soundtrack is a huge part of Undertale's experience.

Listen to the soundtrack here

To prevent spoilers, some tracks are not listed on the public soundtrack page. Please add "hidden" tracks to the second folder, as their titles or musical cues can be a spoiler for the particularly observant, and the surprise of an unexpected track can add to the moment some of them appear in.

open/close all folders
Regular Tracks
Advertisement:
Hidden Tracks
Official reprise albums tracks
While Undertale's success give many musicians the desire to recreate the game's tracks, three albums got the approval of Toby Fox himself.

In late 2015, RichaadEB and Amie Waters released a compilation of their respective reprises called "Determination"

; the album is separated into a red disk for the former's metal simple but nonetheless epic covers of battle themes and a blue disk for the latter's most original electro reprises of areas and events occurring in the story.

Determination: The Purple Side

Because they could not stop with the album above, RichaadEB and Amie Waters released another album called "The Purple Side"

After all this metal and electro, smooth sounding jazz is welcome, isn't it? Carlos Eiene (better known as insaneintherainmusic) made a jazz reprise album called "Live at Grillby's"

.
Official Orchestra Performance
The whole soundtrack is available to view

through the official Undertale Channel.