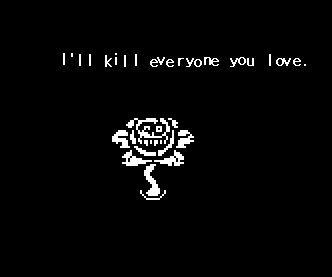 It's hard to decide what's worse: the face he's making or the fact that he's not bluffing.
"Welcome to my special hell."

Despite being billed as a cute and quirky RPG, Undertale is incredibly scary at points, featuring some stuff that will downright traumatize a child… or an adult, for that matter.

WARNING: If you read these examples at night, you're gonna have a bad time.