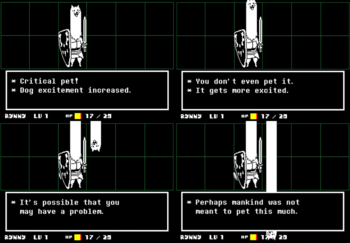 As a game inspired by the Mother series, Undertale has its share of quirky humor, a good chunk of which is used to poke fun at various video game tropes.

Moments pages are spoilers off. Read with caution!

Warning: If you start reading the entries on this page, you're gonna have a GOOD time.

Even better? They were actually tiers in the Kickstarter, and people actually bought them.

Don't you have anything better to—
"I already said that."