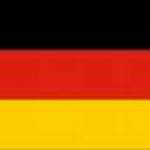 The German flag. Also is Hans von Hozel's avatar on Fanfiction.net
"Hallo there, my name is Hans von Hozel.
I like to write stories to make an improve of my English.
Please read and enjoy! :)"
"I had idea when one day, I going in Berlin. Suddenly, everything in English! I could not understand it. It was like it in another language, so I make English and do stories in it. : D"
— Hans von Hozel
Advertisement:

Hans von Hozel is one of many writers on FanFiction.Net, though his original account and fanfics are no longer on the website, having been removed by the site without explanation. Probably the most notable thing about Hans' collection of fics is that he had a fic for just about everything. Well, maybe not everything, but chances are if there's a huge fanbase (e.g. Twilight), there will be a fic for that sooner or later. Although, the plot might not have to do with the storyline at all...

His fanfictions have been archived by Wayback Machine here

. You can also find a steadily-building archive of his old work here

, though it hasn't been nearly as prolific as his old account was.