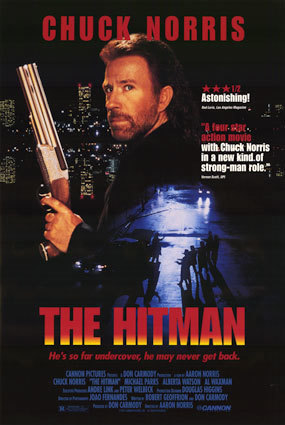 The Hitman is a 1991 action movie/crime thriller made by The Cannon Group starring Chuck Norris.

After being betrayed by his partner Ronny "Del" Delaney (Michael Parks) during a drug bust at the Seattle docks, ex-cop Cliff Garrett (Norris) has gone undercover in the West Coast Mafia as a hitman. He quickly finds himself embroiled in an escalating Mob War between the U.S. Mafia, a Canadian outfit, and the Iranian mob recently arrived on the scene. It becomes personal when Garrett discovers that Del is somehow involved in the mob war.