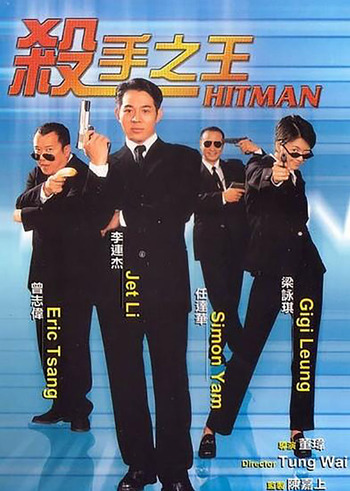 Let's play a game called "Spot the banana"... note Give up? See what is Eric Tsang holding.
Advertisement:

A mysterious hitman known as the "King of Killers" has murdered a wealthy ex-yakuza crime boss, Tsukamoto, and a bounty of US $100 million is placed on the killer, whose true identity remains a mystery. Assassins and killers from all around Hong Kong, including Tsukamoto's grandson Eiji, have their eyes on the prize.

Among the bounty hunters who learn of the prize, is an ex-soldier, Fu (Jet Li), who is an elite fighter but not trained in the skills of being a killer. Teaming up with Ngok Lo (Eric Tsang), a self-proclaimed "expert trainer", Fu ends up becoming part of a larger game where assassins from every corner are eager to kill each other for the bounty. And thrown into all these, is Hong Kong police Officer Chan (Simon Yam), who is investigating the killings.

Do not confuse this with the video games, the Chuck Norris film or the 2007 film.