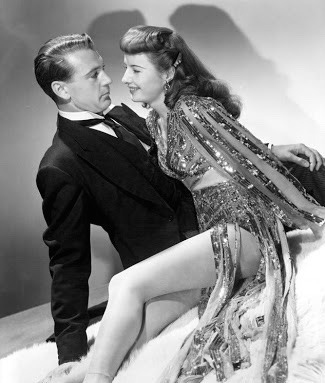 Once upon a time — in 1941 to be exact — there live in a great, tall forest — called New York — eight men who were writing an encyclopedia. They were so wise they knew everything: the depth of the oceans, and what makes a glowworm glow, and what tune Nero fiddled while Rome was burning. But there was one thing about which they knew very little — as you shall see...
— Title card
Advertisement:

Ball of Fire is a 1941 American screwball comedy starring Gary Cooper and Barbara Stanwyck, and was co-written by Billy Wilder, directed by Howard Hawks with a score by Alfred Newman. It was nominated for three Academy Awards, including Best Actress and Best Story, and was then remade into a musical movie in 1948 called A Song Is Born, also made by Hawks.

Loosely based on Snow White, nightclub performer Katherine "Sugarpuss" O'Shea (Stanwyck) decides to hide in a communal library with a group of professors in order to escape being caught by the police, due to her fiance Joe Lilac's (Dana Andrews) mobster activities.

There, she meets the tall, sheltered and conservative English professor Bertram Potts (Cooper), who is determined to understand the ever-changing colloquialisms of the socialites of today, in order to put it inside an encyclopedia with his other colleagues' work from all sides of the curriculum. With the help of other members of the public, he's rounded up, including the garbage disposal man that visits the mansion every day, Potts invites Sugarpuss to work alongside them, remembering one of her nightclub performances that he attended for research.

However, with her fiance's patience wearing thin and wanting to elope as soon as possible, Sugarpuss tries everything she can to stop tension in the professors' home and successfully distracts them from her true intentions, but her friendliness soon backfires when Bertram confesses he has a crush on her and pops out an engagement ring.

Bertram admits to Sugarpuss that he is attracted to her as he is asking her to leave on short notice. When he admits that he became aroused when the sunlight hit her hair, a smug Sugarpuss responds by standing in front of a sunny window.

Example of:
The Tease

Bertram admits to Sugarpuss that he is attracted to her as he is asking her to leave on short notice. When he admits that he became aroused when the sunlight hit her hair, a smug Sugarpuss responds by standing in front of a sunny window.