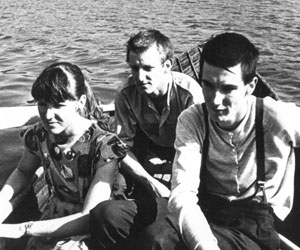 Young Marble Giants was a Post-Punk band formed in Cardiff, Wales, in 1978. Their members were Alison Statton and the Moxham brothers, Philip and Stuart.

Their sound was very minimal, carefully constructed and, at the same time, with a strong sense of spontaneity and sensibility. After appearing on a largely forgotten compilation, they were signed by Rough Trade and released one album, one single, and one E.P, disbanding in 1981. Their album, Colossal Youth, is considered one of the greatest albums of the Post-Punk era. It was recorded with the minimum amount of equipment, in three and a half days, and featuring only one overdub.

After they disbanded, Stuart Moxham formed The Gist, while Alison Statton formed Weekend with Philip Moxham. Philip also played bass on Everything but the Girl's Idlewild album.

The group reunited and toured intermittently throughout the 2000s-2010s, though aside from one song recorded for a BBC Radio Session in 2003, chances of new material was slim.

Their sound influenced a fair share of groups, most notably The xx. They also garnered a few big-name fans, like Peter Buck, Stephin Merritt, and Kurt Cobain. Another prominent fan was Cobain's wife Courtney Love; her group Hole released a Cover Version of YMG's "Credit in the Straight World" on Live Through This.