Music / Live Through This 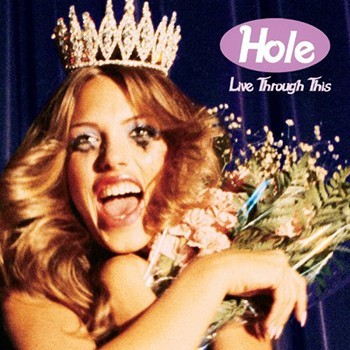 Live Through This is the second album from Hole, released just four days after Kurt Cobain's suicide in 1994. It was also their only album with bassist Kristen Pfaff, before she too died of a heroin overdose just two months later.

It garnered critical acclaim, sold millions of copies, and even made it into Rolling Stone's Rolling Stone: 500 Greatest Albums of All Time list at #460—it was also featured in Time Magazine's 2006 All Time 100 Albums. A big-name fan was influential British radio DJ John Peel who, in 1997, placed it at #19 in a list of his 20 personal favorite albums note  It was by no means meant as a definitive list, as he felt that top albums lists "are terribly self-indulgent" and said "he'd change it to a completely different list if he would be asked again a week later". But it was the only time in his life he agreed to make such a list, so in that regard pretty close to being a definitive list. when asked by the newspaper "The Guardian".

Persistent urban legends claim her late husband Cobain ghostwrote most of the material. Despite this baseless rumor Live Through This is widely acclaimed, with hit songs like "Violet", "Miss World", "Asking For It", "Rock Star", "Softer, Softest", and "Doll Parts".