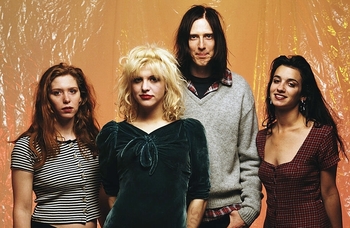 The classic mid-90s lineup. Left to right: Patty Schemel, Courtney Love, Eric Erlandson, Kristen Pfaff.
Oh the boys, on the radio,
They crash and burn they fold and fade so slow,
In your endless summer night I'll be on the other side,
When you're beautiful and dying all the world that you've denied,
When the water is too deep, you can close your eyes and really sleep tonight...
Tonight...
"Boys on the Radio"
Advertisement:

Hole was an American Alternative Rock band founded in Los Angeles, California in 1989 by lead singer Courtney Love and guitarist Eric Erlandson, in the wake of Erlandson answering Love’s classified ad wanting to start a band. Inspired by Los Angeles' punk rock scene, their first album, Pretty on the Inside, was produced by Kim Gordon of Sonic Youth, and attracted critical interest from British and American alternative press. Their second album, Live Through This, was produced three years later and featured less aggressive melodies and lyrics, and went on to achieve platinum status within a year. Their third album, Celebrity Skin, marked a notable departure from their earlier punk influences, boasting a more commercially viable sound; the album sold around 2 million copies worldwide, and earned them significant critical acclaim. They disbanded in 2002, their individual members exploring independent projects, only for Love to reform the band with all new members. The reformed band released the album Nobodys Daughter (2010), which had originally been conceived as Love's second solo album. In 2013, Love retired the Hole name, releasing new material and touring as a solo artist.