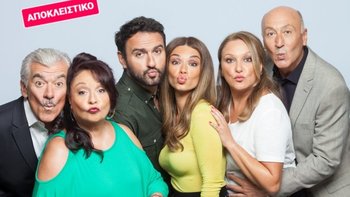 from left to right: Vaggelis, Alexandra, Savas, Lydia, Hara, Menelaos
"Why did I have to be born in this family?"
— The theme song
Advertisement:

Your Family (in Greek "Το σόι σου") is a famous TV series in Greece.

It's a comedy with a bit of slice-of-life story, centering on the two main characters and the interaction they have with their family every second Sunday when they go to eat.

It is based on a Spanish sitcom called Your Family or Mine. It has, so far, 246 episodes in four seasons.