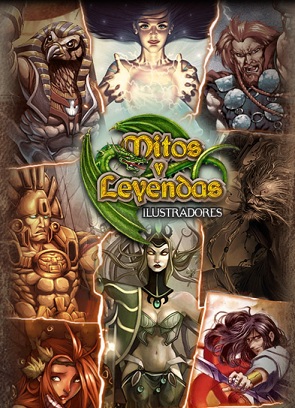 All characters from myths and legends of different societies, fighting each other.
Advertisement:

Mitos y Leyendas (lit: Myths and Legends) is a Chilean trading card game, launched in the year 2000 by Salo. Gameplay-wise, the game is heavily based on Magic: The Gathering, pretty much like most collectable Trading Card games, but there are three points that made this game remarkable. First one is the art, featuring Chilean illustrators such as Mauricio Herrera

. The second is that it features characters and elements from legends, mythology and history around the world; since it was (originally) produced for Latin America, it included a lot of folklore and legends from Latin America that are rarely seen anywhere else. Having a card based on San Martín

is something you don't see everyday!

The third point is the gameplay itself. The game has 5 types of cards:

The objective is to destroy the opponent's Castle Deck — that is, to reduce the amount of cards in their deck (either by attacking it with Allies or otherwise sending their cards to the Cemetery, Exile or... not the deck) until it has no more left. In short, the number of cards in your deck is Mitos y Leyendas's equivalent of Hit Points.

Since the game was produced with the Spanish-speaking market in mind (and not globally like Yu-Gi-Oh! or Magic: The Gatheringnote You should be aware that there are English and German translations of this game, but they were not the main target.), due to this and problems with how Salo managed their other properties and album prizes, the company who produced the TCG went into bankruptcy in 2009, leaving the game on "undefined hiatus". A Deviantart page

meant to compile the artwork from the game was created in the meantime.

In 2014, Klu! and Fenix Entertainment launched the new edition "Furia", thus bringing the game back to life, with more than 15 new editions being released since. Only catch? They're uncompatible with previous versions of the game (down to having new versions of characters previously appearing pre-discontinuation), and, for the time being, only sold in Chile. You can find the Mitos y Leyendas official website here

In late 2018, a free-to-play online version of the game was announced under the title Myths and Legends Online for Steam

. The game will be available for free in English and Spanish. A closed alpha of the game (available for people who got a code from the physical Legendary Collections) was released in May 30th, 2019, with an official teaser

being released the day before. It also has an official website

The Steam version is currently in open alpha and available to the public, but still suffers from some glitches, untranslated text and lag due to its unfinished state.

Compare with Mampato, another popular Chilean work that focuses heavily on world history and mythology with educational purposes.