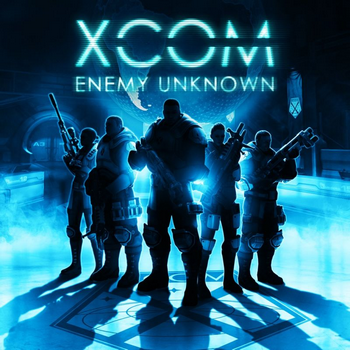 From the makers of Civilization... comes a game about civilization's last stand.
"Two possibilities exist: Either we are alone in the Universe or we are not. Both are equally terrifying."
— Arthur C. Clarke, opening quote for Enemy Unknown
"Those who play with the devil's toys will be brought by degrees to wield his sword."
— R. Buckminster Fuller, opening quote for Enemy Within
Advertisement:

In the year 2015, Earth comes under attack by alien forces. In response, a secretive Council of Nations activates the XCOM project, a Multinational Team tasked with fighting the alien invaders and researching their technology to protect humanity. The player takes the role of the Commander of XCOM, and with the help of various NPC advisors, guides XCOM to victory (or defeat) by managing the whole organization, including base building, research, manufacturing and sending fighters to intercept UFOs. The main focus of the game, however, is on the ground combat, where the player takes control of a small squad of soldiers and fights turn-based battles against the aliens.

In combat, the player commands up to six soldiers who can level up and specialize in four different classes (Assault, Support, Heavy, and Sniper) with unique weapons, equipment, and abilities. Each soldier gets two actions per turn, though using any action other than 'move' normally ends that unit's turn. Every soldier is equipped with one primary weapon, one pistol (Heavies get a Rocket Launcher instead), and an additional piece of equipment that the player decides (such as a grenade or medikit).

Outside of combat, the player manages the XCOM base, where you're forced to choose which upgrade projects to research, what weapons/items to build, what new facilities to build, and which alien threats to go after with your limited resources. Players also have to monitor the panic in various countries; if it gets too high, the country might withdraw their funding from the XCOM project (and if too many leave, it's an automatic Game Over).

An expansion, XCOM: Enemy Within, was released in November 2013. It added new enemy types, maps, items and customization options, the ability to genetically enhance XCOM troopers, a new XCOM unit called the Mechanized Exoskeletal Cybersuit Trooper and a new alien resource called Meld. It also introduces a new enemy faction: EXALT, a human paramilitary group acquiring alien technology to Take Over the World. Unlike the aliens, EXALT resorts to cloak and dagger tactics, such as increasing panic and stealing XCOM's resources, forcing the player to use intel gathering and counter intelligence ops to bring them down. Finally, it added a second mission chain like Slingshot, and indeed it had originally been designed as one.

The XCOM: Long War Game Mod adds significantly more content to the game. It was first released in 2013.

A character page is under construction here. Please add all character- and class-specific tropes there!

Prepare for deployment, Trope One: